Satanic Graffiti Outside of St. Joseph's on Capitol Hill

A D.C. Knights of Columbus chapter removed satanic graffiti from outside a parish on Capitol Hill this past Saturday.

On Saturday morning, Patrick Abbott, an officer in local Patrick Cardinal O’Boyle Council 11302 of the Knights of Columbus, received a text message from a fellow Knight. He was asking about an image that had appeared on the sidewalk outside of the church of St. Joseph’s on Capitol Hill.

“I took one look at the photo and said it was Satanic graffiti,” said Abbott. “I offered to wash it up and headed out to clean it.”

You can read the rest of it from the Catholic News Agency.

Posted by A WASHINGTONDC CATHOLIC at Wednesday, March 17, 2021 No comments:

Ah yes, it is that time of year, when the Pastor and his staff are required to beg for the Annual Appeal.  We heard about it at the "Commitment Weekend."

There were fliers in the back of the church weeks ago, and now I received it about a week or so ago.  I just found it, as it has sat under a pile of papers.

In looking at the letter and flier, here is what I found unusual:

1.  The request did not come from +Gregory, but from Joseph M. Gillmer, the Executive Director of Development.   This is unusual, because normally it "comes from" the Cardinal/Archbishop.   Maybe they believe it is too polarizing to have him on the letter.

2. The flier I received, does not mention or even have a photo of +Gregory.   Again, not normal but he has been controversial, so maybe they want to downplay it.

3.  There is no mention about the amount to be raised in total.  Maybe they don't want people to know if they fall short, and by how much.

4.  If you send in your $$ by mail, using the envelope, it is processed in Topeka, KS.   Guess they got a really good deal, but you would think that after they have laid off a number of employees, they would want that work done locally.

Posted by A WASHINGTONDC CATHOLIC at Friday, March 12, 2021 2 comments:

The Driving Test (A Joke)

A teenage boy had just passed his driving test and inquired of his father as to when they could discuss his use of the car.

His father said he'd make a deal with his son:“You bring your grades up from a C to a B average, study your Bible, and get your hair cut. Then we'll talk about the car.

The boy thought about that for a moment, decided he'd settle for the offer, and they agreed on it.
After about six weeks his father said,“Son, you've brought your grades up and I've observed that you have been studying your Bible, but I'm disappointed you haven't had your hair cut.”

The boy said, “You know, Dad, I've been thinking about that, and I've noticed in my studies of the Bible that Samson had long hair, John the Baptist had long hair, Moses had long hair ~ and there's even strong evidence that Jesus had long hair.”
The Dad's reply: “Did you also notice that they all walked everywhere they went?”

Posted by A WASHINGTONDC CATHOLIC at Friday, March 05, 2021 No comments:

As you know, a few weeks ago, I posted an image of a "tweet" by Deacon Mark Asselin of the Archdiocese of Washington.  BTW, he us assigned to St. Elizabeth's Church in Rockville, MD.

Well, it seems that he must have gotten his hand slapped by someone, as that tweet is gone!

The original posting was made on February 17th and as you can see from this image of that period of time, it has disappeared.

I will be keeping an eye on him and hopefully, you will too. 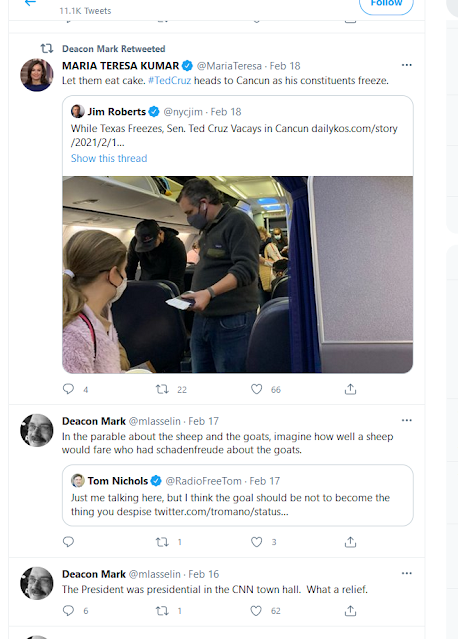 Posted by A WASHINGTONDC CATHOLIC at Wednesday, March 03, 2021 No comments: