The Chutzpah of Cardinal Cupich

I normally try not to comment on things happening in other diocese, but this one takes the cake.


Cardinal Cupich states that (1) the Pope has better things to do than to handle sexual abuse of seminarians and minors and (2) that those who think Pope Francis is wrong are racists.


What I have found is that when you have no other argument that you can make, calling someone a racist is your last hope.


He is another one who needs to go but I guess he is doing all he can to protect his benefactor.


Watch the television interview here from NBC Chicago.
Posted by A WASHINGTONDC CATHOLIC at Wednesday, August 29, 2018 No comments:

Updates on the Current Scandal

There are so many updates and new stories, it is hard to keep track of them all.  However, here are some:


Where did McCarrick live after alleged Vatican Sanctions?

Seven Reasons Why I Believe Archbishop Vigano's Allegations To Be Credible

POPE FRANCIS MUST STEP DOWN!
Posted by A WASHINGTONDC CATHOLIC at Monday, August 27, 2018 No comments:

Washington D.C., Aug 26, 2018 / 10:17 pm (CNA).- Monsignor Jean-François Lantheaume, the former first counsellor at the apostolic nunciature in Washington D.C., has said that the former nuncio, Archbishop Carlo Maria Viganò, told “the truth” in his explosive statement released to the press on Aug. 25.
For the complete story, go to Catholic News Agency.
Posted by A WASHINGTONDC CATHOLIC at Monday, August 27, 2018 No comments:

Pope Franics must step down!

In his testimony, dated August 22, Archbishop Viganò, who served as apostolic nuncio in Washington D.C. from 2011-2016, states that in the late 2000s, Benedict had “imposed on Cardinal McCarrick sanctions similar to those now imposed on him by Pope Francis,” and that Viganò personally spoke with Francis about the gravity of McCarrick’s abuse soon after his election in 2013.

But he says that Francis “continued to cover him” and not only did he “not take into account the sanctions that Pope Benedict had imposed on him” but also made McCarrick “his trusted counselor” who helped him to appoint a number of bishops in the United States, including Cardinals Blase Cupich of Chicago and Joseph Tobin of Newark.

Archbishop Viganò also implicates Cardinals Sodano, Bertone and Parolin in the cover-up and insists various other cardinals and bishops were well aware, including Cardinal Donald Wuerl, McCarrick’s successor as Archbishop of Washington D.C.

Read it all here from LifeSiteNews.

I am calling for all Catholic bloggers to call for Pope Francis and Cardinal Wuerl to step down!

Pope Francis Must Step Down!
Posted by A WASHINGTONDC CATHOLIC at Sunday, August 26, 2018 No comments:

For the entire story, please go to the National Catholic Register
Posted by A WASHINGTONDC CATHOLIC at Monday, August 20, 2018 No comments:

After two years of college seminary, Joseph Ranieri learned the Archdiocese of New York would not allow him to become a priest. The reason: New York had “too many priests.”

Ranieri was informed that — as the child of a broken home — he did not “make the cut” for the see’s major seminary.

Just as his road to the priesthood seemed to come to a dead-end in New York, God opened a new path. And for the past 60 years, Msgr. Ranieri, 86, has served as a priest of the Archdiocese of Washington instead.

“But that was God’s providence,” he told the Register, his New York accent as strong as ever. “I would not have traded my ministry in Washington for anything in the world.”

More than 65 years after New York thought he would not make much of a priest, Msgr. Joseph Ranieri received a different letter from the current archbishop of New York, Cardinal Timothy Dolan. This time, Msgr. Ranieri was asked to accept a 2018 “People of Life” award from the U.S. Conference of Catholic Bishops to give national recognition to his 10 years of priestly ministry with Project Rachel, a post-abortion-healing ministry.

To read the full story, please go to NCR.
Posted by A WASHINGTONDC CATHOLIC at Friday, August 17, 2018 No comments:

In these trying times, we need a little laugh...

I have a Peanuts calendar on my desk.

This came up over a month ago, and thought that a little "Peanuts Humor" is what we need, in the midst of all of the darkness. 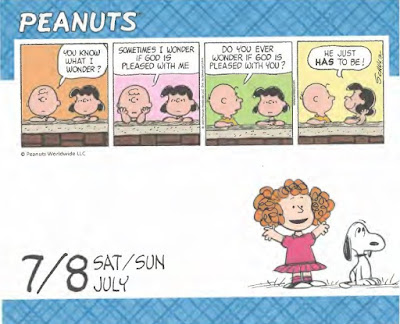 Posted by A WASHINGTONDC CATHOLIC at Thursday, August 16, 2018 No comments:

I have never seen so many "ordinary Catholics"-who usually never follow or hear about Church news-as deeply troubled as I have seen them in response to the recent revelations about the retired archbishop of Washington, DC.

Cardinal Theodore McCarrick was asked by the pope to resign from his membership in the College of Cardinals and ordered to live in seclusion until a canonical trial can be held to verify the validity of charges of sexual abuse and harassment made against him. After the first brave person came forward (whose accusations were found credible by the Archdiocese of New York Review Board), more and more followed. The climate of fear among many of our clergy-the fear of being punished or marginalized if they report sexual immorality among their fellow clergy or leaders-is starting to break. Cardinal McCarrick is now known as Archbishop McCarrick.

What has been so disturbing to so many people is the fact that there had been numerous warnings to various church officials that he was a homosexual predator, harassing many seminarians, priests, and young boys, for many years, but nothing had ever been done about it, and he was continually promoted. Even after a delegation of priests and lay people went to Rome to warn the Vatican about the situation, he was promoted. Even after a leading Dominican priest wrote a letter to Cardinal O'Malley, nothing was done. Even after lawsuits accusing him of homosexual sexual harassment in two of his previous dioceses had been settled with financial awards, he was still promoted. And not only that, he became a key advisor to Pope Francis and offered advice on whom to appoint as bishops in the United States!
To read the rest of this letter from go to A Letter from Ralph Martin
Posted by A WASHINGTONDC CATHOLIC at Thursday, August 02, 2018 1 comment: