Well, I decided to spend a couple of minutes and take a look at his Twitter feed.

What I have noticed are two things:  (1) He retweets a great deal; and, (2) there is never any criticism of Joe Biden.

Not one drop of criticism, although he head plenty to say when Donald Trump was president. Search through his twitter feed and you can't find any. 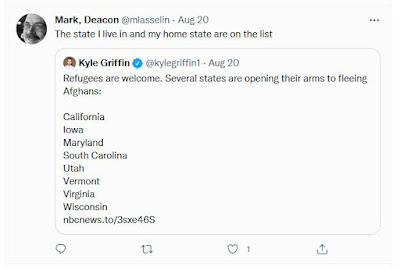 This is the only tweet about the fall of Afghanistan.  Not a drop of criticism of Biden, although he was and is a strong supporter of Biden.  Guys like him are the cause of this, and own it. 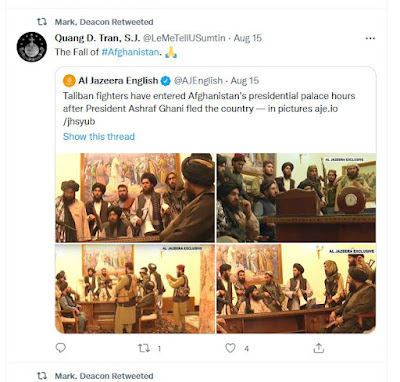 So here we have him sticking up for +Cupich, when it was +Cupich who put this poor priest in the position.  And yes, you know what would have happened to the poor priest, who was told by +Cupich to fill in at the last minute, if he had denied Communion.  The worst part are the comments by supposed "Catholics." 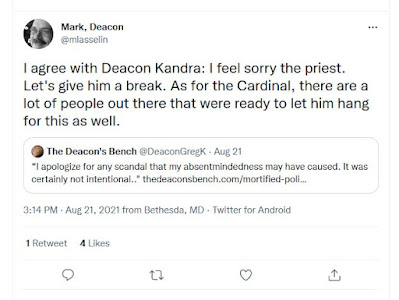 Posted by A WASHINGTONDC CATHOLIC at Saturday, August 28, 2021 No comments:

It has been a while since I have done one of these, and I don't always have the time to look, but I will tell you, for a person who works full time and is a deacon, he certainly tweets a great deal.

I have really got to stay more on top of his antics. 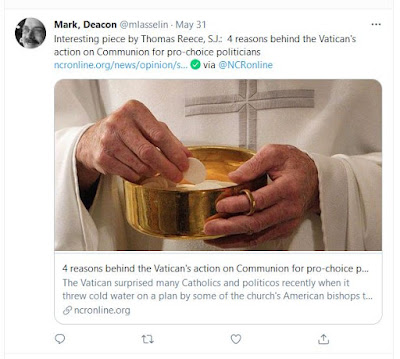 Attacking a prelate and those who wish to worship using the TLM.   Not very nice but that is par for the course with him. 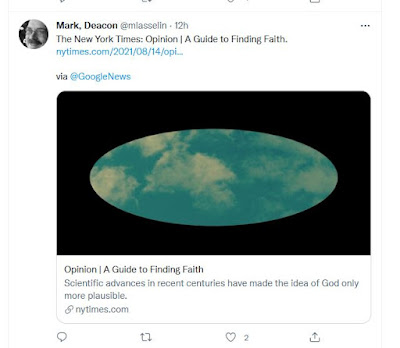 Finding faith in the NYTimes.  Really? 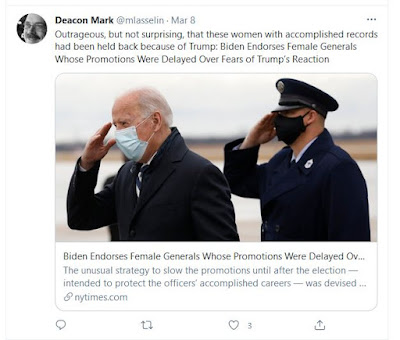 Did not realize that he was so in tune with military promotions.

Posted by A WASHINGTONDC CATHOLIC at Thursday, August 26, 2021 No comments:

Mr. McCarrick to appear in Court

Former cardinal Theodore McCarrick was criminally charged in Massachusetts last month with sexually assaulting a 16-year-old during a 1974 wedding reception at Wellesley College in Wellesley, Massachusetts.

McCarrick was initially summoned to appear in court this week, on Thursday, August 26. But his first court date — called an arraignment — has been rescheduled to next week; the hearing will take place on Sept. 3.

To read the full story, go over to The Pillar.

Posted by A WASHINGTONDC CATHOLIC at Monday, August 23, 2021 No comments:

Vice-Rector of North American College Returns to Arch. of Washington

ROME, Italy (LifeSiteNews) – The vice-rector of the North American College (NAC) in Rome is returning to the United States.

Father Adam Park has stepped down from the senior position at the elite seminary following allegations that he sexually harassed seminarians under his care.

Park’s home diocese is Washington, D.C., where he once served as the secretary to Cardinal Donald Wuerl. The archdiocese is currently under the leadership of LGBT-apologist Cardinal Wilton D. Gregory.

To read the complete story, please go to LifeSite News.

Posted by A WASHINGTONDC CATHOLIC at Tuesday, August 10, 2021 No comments: