Well is seems that the Parish Council over at Holy Trinity in Georgetown, known for being part of the liberal wing of the Church, has decided to publicly support Biden in receiving Holy Communion.

This is really just posing, as they really have no standing on the matter.

However, I know that Cardinal Gregory will be overjoyed to know of their support.

You can read it here:  Washington Examiner.

Posted by A WASHINGTONDC CATHOLIC at Wednesday, June 30, 2021 3 comments:

What has Deacon Mark Asselin been up to recently?

It has been a while since I posted, but sometimes work and life gets in the way of the important stuff.  However, you can always find me on twitter -- that time sink of an application.  Yes, I am addicted to it, but it is fun to periodically tweak a liberal nose or two.

As you may recall, one of the most prolific tweeter's in the Archdiocese of Washington is Deacon Mark Asselin.  Don't remember him, well he is the Deacon who supports Planned Parenthood.  Don't see it on his tweet feed, I have a photo of it in a previous post.

He use to post a lot about Asian-American hate attacks, but that was when the narrative was that they were perpetuate by whites.  When documentation started to show that it was mainly but not exclusively African-Americans doing the attacking, he suddenly became very quiet.

So, what is he up to these days.  Here are a sampling of his tweets: 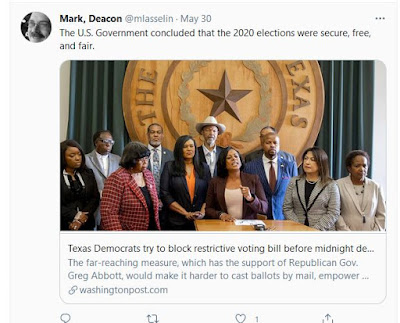 Still portraying the WaPost as the gospel. 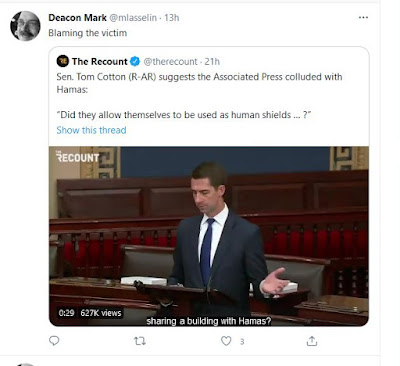 Hamas has used schools and other civilian buildings as cover for arms manufacturing and rocket launch pads.  After learning that the AP was in the same office building as Hamas, and knowing that they were there, he still blames Israel. 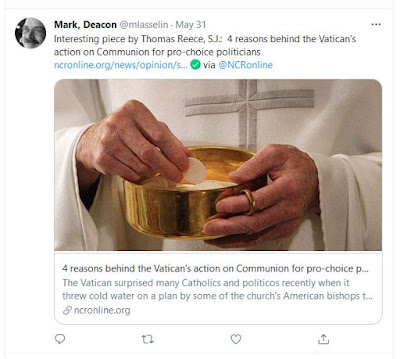 He seems to support Communion for pro-abortion/pro-homosexual marriage politicians who are obstinate and very public.

And yet, the most anti-Catholic Catholic president is not a scandal to him.  But at least Biden doesn't send out mean tweets.

Posted by A WASHINGTONDC CATHOLIC at Wednesday, June 16, 2021 No comments: