St. Philip Neri Council (Linthicum Heights, MD) helped transport thousands of pounds of groceries to the parish food pantry after collections organized by a council member and his family.

The two celebrations brought in more than 2,300 obs. of food, which Knights delivered to St. Philip Neri Church.

Taken from Columbia Magazine (December 2020).   Thank you Melvin for sending this to me.

Posted by A WASHINGTONDC CATHOLIC at Monday, January 25, 2021 No comments:

Where in the Archdiocese is +Gregory?

One of the things that +Gregory has decided to continue to do, from his predecessor +Wuerl, is not to publish his schedule.

Mr. McCarrick, when he was Cardinal, would publish a weekly calendar of a few (not all) of his meetings, Masses, etc.  This was usually published in the Catholic Standard.

When +Wuerl took over, he continued it, but as the sexual abuse scandal grew, the calendar eventually disappeared.  In addition, he started to see some protests against him.  So, if you don't know where he is going to be, you can't confront him.  In addition, some events sponsored by various groups in the diocese, were starting to see protests.  For example, when Chris Matthews was hosted at his parish, for a book signing, a couple of Catholics confronted him in the parish hall.

Now, when +Gregory took over, he continued that tradition.  You don't know where he will be until after he was there, except for some of the virtual events.  This ensures that any Catholics who wish to let their voices/opinions be know, well, they are kept in the dark and cannot confront him.

Now, let me make this clear, because someone will see my comments and take it the wrong way.

I am NOT ADVOCATING VIOLENCE against +Gregory.

Let me repeat myself, I AM NOT ADVOCATING ANY VIOLENCE AGAINST +Gregory in any way, shape, or form.

If you wish to have a peaceful protest outside of the church building, where his is, that is okay.  If you can get into the coffee/donut time after an event, to question him, great. But no violence.

However, what +Gregory is doing is simply hiding from the faithful that are upset at him.  He knows it.

So, if you know where he will be, let me know and we will let others know.

Again, if you decide to confront him, do so with facts.  No violence.

Posted by A WASHINGTONDC CATHOLIC at Thursday, January 21, 2021 No comments:

Well it seems that my criticism of +Gregory has been too much for him or at least the person who handles his Twitter account.

I have been blocked.

It is not that the he or the person who manages his account posts a heck of a lot, because in the last 30 days, he only tweeted three times.  But I guess one of my comments hit a bit too close to home.

Someone told me I should see it as a badge of honor.

PS:  Someone who follows me on Twitter asked him, why he is blocking certain Catholics from his feed.  The Cardinal then blocked him.  Very. Thin. Skin. 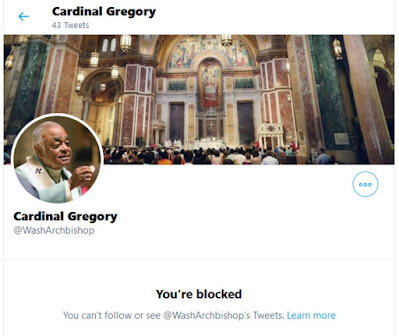 Posted by A WASHINGTONDC CATHOLIC at Tuesday, January 19, 2021 1 comment:

Man, oh Manischewitz, Deacon Mark Asselin just continues on like the Energizer Bunny.   Here we are at posting #24.

Now, over the last two weeks, I have noticed a slight change in his "tweets."

What is it, you ask?   Well what I have seemed to have noticed is that he does not comment as much, as he use to.  Now, it seems that he more and more he simply retweets without comment.

Nevertheless, let's take a look at what Deacon mark Asselin, currently assigned to St. Elizabeth's in Rockville, MD is up to.

So here we see that he what he believes about most Catholics.  Most likely it is conservative Catholics.

On this tweet, if you watch what is going on, over the summer a number of black members of law enforcement were called the "N-word," "Uncle Tom's," and other choice words.  (Yes, there are videos of this.)  However, Deacon Mark seems never to have mentioned any of this.  Do you wonder why? 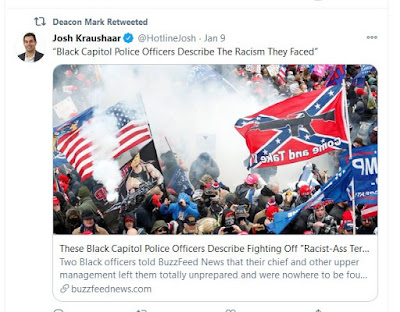 Well, the problem with this statement is that flags were lowered.  Yet, Deacon Mark did not seem to either delete this or correct the story.  This seems to be a recurring theme with him.

Yet, I guess it must have slipped his mind, that Arnie Schwarzenegger cheated on his wife.  Guess that Catholic reference did not matter. 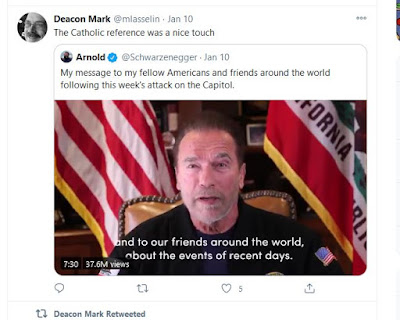 Posted by A WASHINGTONDC CATHOLIC at Monday, January 18, 2021 No comments:

+Gregory Designates the US Capitol "A Sacred Place"

+Gregory really does not know when to stop.

He got caught in a lie about the President's visit to the JPII Center.

Did not quarantine when he returned to DC from Rome.

Makes another plea for funds, due to low donations.

And now...decides that the Capital, like a Church, is a sacred place.

Should it be place of peace and non-violence.  Yes, I would agree.

Should it be a place of respect?  Yes.

Is is a place like a Church or a battlefield, in which many American's died?  No.

But, he has determined that it is a "sacred space."

Oh, do you notice he condemned the violent rhetoric due to the unrest/violence, but over the summer, gave that same stuff a pass.

You can read the story from CNA.

Posted by A WASHINGTONDC CATHOLIC at Saturday, January 09, 2021 No comments:

Well, Friday brings us another edition of "What did Deacon Mark Asselin Say on Twitter?"

One of the biggest issues with Deacon Mark is that he seems to love to talk about politics.  Now, I was under the impression that this was a no-no for ordained clergy.  Not only that, but he seems to have an inordinate amount of time for it.

I guess the folks over in Hyattsville do not care.

I guess allowing the Constitutional process to go forward, is not okay in his opinion.

Seems that EWTN, because of the controversy regarding changes, they should loose their tax exemption.  Wonders if he feels the same way about the Catholic Church in the US?

Again, allowing someone to follow the Constitutional process - a legal process, which the Democrats have used before -- deserves a recall?  Really?

Looks like he listened to the edited version by the Washington Post, as opposed to the unedited.  But then again, to Deacon Mark, the Wash comPost is gospel truth.

Now, this is a very interesting posting.  I will let you decide. 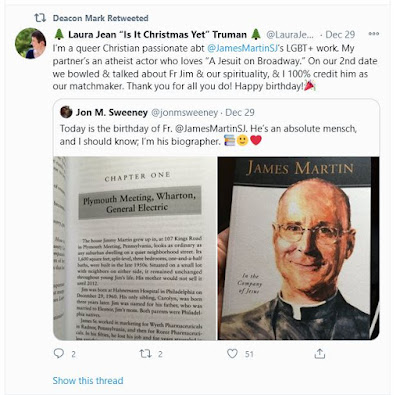 Posted by A WASHINGTONDC CATHOLIC at Friday, January 08, 2021 No comments:

For the last seven, eight, or maybe even nine years, I have asked the question of certain individuals:

Are we first and foremost a Church, with a social agency arm or are we a Social Agency that has a "side hustle" to be a Church?

My answer has been that we have been moving more and more into becoming a social agency.

No where was that more apparent to me, than the 2019 USCCB meeting, at which I learned that the Church is the landlord for over 30,000 apartments, and spends $$$ on Clinic Legal, to defend both legal and illegal aliens.

Today, I read the editorial, by the new editor, of CRISIS Magazine, and he asks this question, in a much nicer and more educated way than I do.

If you have the opportunity, it is a quick read.

Posted by A WASHINGTONDC CATHOLIC at Wednesday, January 06, 2021 No comments:

Yes, once again, we bring you the prolific, sometimes stupid, and never entertaining, tweets of Deacon Mark Asselin of St. Elizabeth Church in Rockville, MD.

Wow, he really believes that a good buddy of Bill Clinton would have been pardoned by Pres. Trump.

Again, Deacon Mark lives in a fantasy world, where he believes that the election was completely on the up and up, even though he works for the office that was suppose to ensure that there was no hacking of US government offices.

The "Rev." Barber is one of those who sees everything in terms of race.  And Deacon Asselin plays right into the racist arguments.  Deacon Asselin does not think that black protestant ministers can fall into this category.  Well then, you must have your head in the sand. 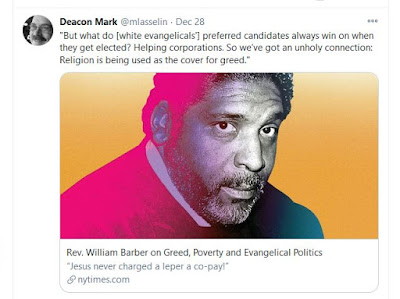 In this tweet we see Deacon Mark chastise Marco Rubio.  Notice how he only seems to be upset at Catholics who do not see it his way.  However, we do know that St. Fauci has changed his statements on things over time. Also notice where his facts come from MSN -- a very left wing media outlet.  But Deacon Mark is pretty left wing. 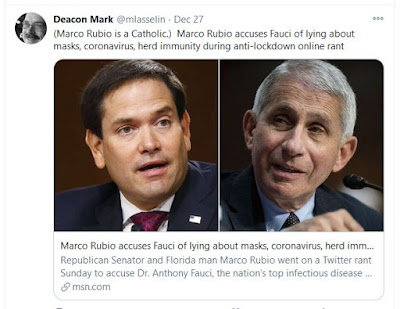 Posted by A WASHINGTONDC CATHOLIC at Monday, January 04, 2021 No comments:

Cardinal Gregory Needs Your Financial Support and I find it baffling and reprehensible...

Well, as we come to the end of the year, Cardinal Gregory has issues a plea for financial help.

I find it baffling & reprehensible that you are once again asking for our support, when you state that you are willing to dialogue with Biden, but refused to do so with President Trump.

I find it baffling & reprehensible that you and your team lied to everyone about knowing that President Trump would visit the JPII Shrine and laid the blame on the Knights of Columbus.

I find it baffling & reprehensible that you are willing to overlook Biden's very public and well known stance on abortion, but refuse to deny him Communion.

I find it baffling & reprehensible that you are willing to look the other way, for those who are in a same-sex marriage, employed by the Archdiocese.

I find it baffling & reprehensible that you remained silent for many months, while our churches were shut down.  The only time you spoke up was when it became apparent, that you would not have large Christmas attendance, which is the largest donation day in the diocese.

I find it baffling & reprehensible that you have the nerve to come and ask for support, after all of these things -- and these are the things which we know of.

So, I say to you and to everyone else: If you choose to donate, ensure that it stays in your parish.  When you donate, specifically state that it must stay in the parish or designate it for a specific use.  For example, pay for the sacramental wine, pay for the hosts, pay the electric bill.   In this manner, the Archdiocese cannot get their hands on it.

Posted by A WASHINGTONDC CATHOLIC at Saturday, January 02, 2021 No comments:

Posted by A WASHINGTONDC CATHOLIC at Friday, January 01, 2021 No comments: