Franciscans Out, Dominicans In at CUA

This summer, Catholic University of America (CUA) will replace Fr. Jude (OFM Conv.) with the someone from the Dominican order. 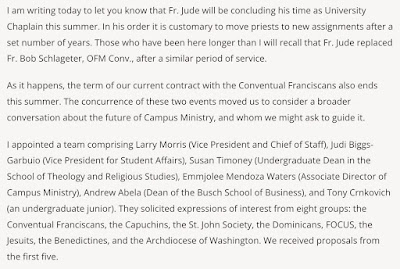 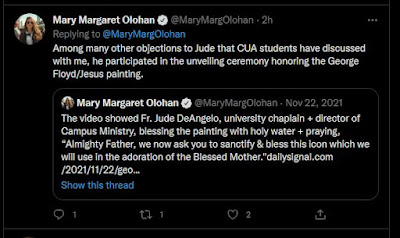 Posted by A WASHINGTONDC CATHOLIC at Tuesday, March 15, 2022 1 comment:

From the Washington Examiner:

It was perfectly fine for 20-somethings to go unmasked on a packed dance floor at Cafe Citron. But a 6-year-old sitting at a school desk at Sacred Heart School was considered a public health risk if her face was uncovered.

To read it all, go here.

Posted by A WASHINGTONDC CATHOLIC at Wednesday, March 09, 2022 No comments:

It seems that on Ash Wednesday, +Gregory gave Biden ashes at The White House.

According to the Catholic Standard:

Earlier that Ash Wednesday morning, Cardinal Gregory had made a brief pastoral visit to the White House. Knowing the challenges of the president attending an Ash Wednesday Mass at a local Catholic church during a time of heightened security, the cardinal offered to come to the White House and administer ashes to the president, who is Catholic and regularly attends Mass.

Now, you note a couple of things:

1.  Biden is a Catholic.  No mention of his stance on abortion and how he is in direct opposition to the Church.

2.  There was no mention of +Gregory having a discussion with him on his stance on abortion, nor any mention of him speaking with Biden on that end.   Something that the Cardinal stated he would do, when Biden was elected.

3.  Did the Cardinal have to do it?  Why couldn't one of he many priests in the diocese go, such as those stationed at St. Stephen's or St. Matthew's?   Could it be for the publicity?

4.  The article leaves out the fact that EWTN asked about the ashes and then about Biden's stance on abortion.  Biden stated that he did not want to get into a discussion of moral theology, before he was pulled away by Jill Biden.

Once again, +Gregory does not fail to disappoint.

Posted by A WASHINGTONDC CATHOLIC at Sunday, March 06, 2022 No comments:

TLM Upate in the Archdiocese of Washington

It seems that +Gregory has established a committee, made up of either four or six members, to review The Latin Mass in the Archdiocese in relation to the Pope's restrictions.

Seems that some of the members, who have been appointed to this committee, are not anti-Latin Mass.  Which is a good thing.

I am not certain when this committee was formed.

No word on when they are they are expected to make recommendations.

Will keep you posted.

Posted by A WASHINGTONDC CATHOLIC at Sunday, March 06, 2022 No comments: